﻿ ﻿
I get of lots foreign language typewriters in the shop. I think mostly because of the area I live in. People come to Boston from all over the world to go to school, seek the best medical care, work or raise a family. Lots of families have a typewriter from their home country. I mention it this week because I sold a Russian keyboard Royal typewriter. It got me thinking about all the wonderful and strange foreign machines that have come through here over the years. I even have two machines in the store right now that I don't know what language they are! One is a Olympia SM 2 that I was told was a Polish language keyboard but last year someone who was Polish said it was not. 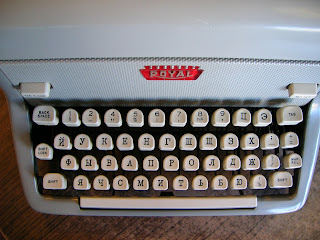 The man who bought the Russian Royal on Thursday didn't come in looking for it. He brought in a IBM Selectric 2 for repair. We got talking for a while and he said he had adopted two children from Russia and explained the difficult process. I happened to mention that I have a Russian machine in the shop. He looked at it and smiled and asked how much is it? He thought that it would be a good tool to help his kids learn their native language. While he was at it, he became smitten with a green Olympia SM3 in Congress Pica type and bought that one too. We ended up having a long chat after we concluded our business and found out we each like to read. He says he just started reading something interesting and went out to his car to get it. He gave it to me and said he'd pick it when he came back for his IBM repair. I said I have something here you might like and and gave him my copy of The Iron Whim. So, I took in a repair, sold two machines, made a new friend and started a book club. Have I mentioned how much I like my job. By the way, The Iron Whim is a interesting read. It came out a couple of years ago and was well reviewed. It's not a book about the history of typewriters but about the history of typewriting and how typewriting changed the course of history in this country.
﻿﻿ ﻿﻿
I get tons of what I call European keyboards. That is machines that will type French, Spanish and German. Hermes 3000's, Olivetti L22 and 32's, Olympia SM's and many other brands of machines fit that bill. Here's a picture of a Remington Standard in Hebrew. Someone brought in this repair several years ago. As you know, hebrew and arabic machines type right to left. This machine had some serious history. It was used for many years in a Manhatten newspaper office that published the largest hebrew paper in New York City. Then this machine was used  by a famous writer (who's name escapes me), for thirty years in her Cape Cod home. The young woman who aquired it was super excited about the history of this machine and desperately wanted to get it working again. However, thirty years of salt air severely damaged the machine. I didn't have much hope for it but it actually came out ok. I kept this machine for about three months and asked many people to interprete the writing on the paper table. Nobody knew, then one day an elderly gentleman came in the shop, saw the machine and read the writing without thinking. He said it means Remington instrument of printed writing. Now that I keep a camera in the shop all the time I will document all the neat machines that come in.
Thats it for this week. Thanks for checking it out. See you next week.
Posted by Tom Furrier at 3:53 PM