Happiness Is A Busy Shop

Nothing like getting your mug plastered all over the TV to drum up a little business. Wow, what a fabulous, busy week. The phone rang off the hook all week, lots of people came in, lots of new repairs came through the door, by customers and by UPS. I sold a whole bunch of machines and supplies, including mailing ribbon orders all over the country. I hate to admit that I actually stressed out at a few points during the week. As any boss of a one man shop will say, you can't be in three places at the same time. There was a near disaster towards the end of the week when the phones went dead late Thursday afternoon and didn't come back on until late Friday afternoon. Talk about bad timing. I know I missed lots of calls. I just hope they call back. It was fun getting phone calls from strangers who saw the show and just wanted to wish me well. Many customers called, including some I hadn't seen in many years, to say how happy they were for me and hope that I stay in business for many more years. I'm still working on getting a DVD of the show to post. I hope to have it soon.
﻿﻿﻿﻿ ﻿﻿﻿﻿
I had some fun sales this week I can tell you about. This first one is typical. A man comes in a few days ago and said his sixteen year old daughter wants an old manual typewriter to type her poetry on. Right away he says "I don't get it, she has a computer. What on earth does she want an old thing like that for". So I start to explain why the kids are connecting to typewriters and why it's a good thing. He nods his head and asks to see what I have. I show him some 1950's Smith Corona's and he says no, she likes older things, in black if you have it. Well, that's my cue to break out the nice stuff. I only had to show him one machine, a beautiful, shiny black Corona Standard in next to mint condition. Even the carrying case looked brand new. Before I even got a piece of paper in it he said, "That's the one. I think that  is exactly what she wants". We continued talking and I'm showing him more things around the shop and as he's leaving he says, "I think I'm starting to get it. These are beautiful machines and I'm glad she decided to get one". And that made my day right there.
﻿﻿﻿﻿ ﻿﻿﻿﻿
Mid week an elderly gentleman from East Boston came in wanting to look at Olivetti L-32's. I had a few ready to go, so he's checking them out and typing away. He said he wants to replace his Brother electronic memory machine and wants to go old school. That's just what I like to hear. After about twenty minutes he asked if I had anything that could type in French. I didn't see that coming but I said I think so. I have a whole shelve of European keyboard machines. And there in the middle is a French keyboard Hermes 3000. And with the original instruction book in French. He checks out the keyboard and starts getting really excited. Rolls in the paper and starts typing and talking in French and finally says that he wants it. He's always wanted to type in French. So now he can! 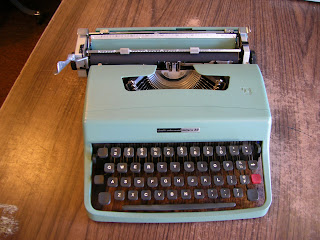 A very nice older lady came in on Friday looking to replace her Royal Royalite that she bought brand new back in the 1960's and could she trade it in towards another portable manual machine. It had to be small and lightweight and easy to use. I have a handful of lightweight machines around but she really liked the Olivetti Lettera 32. So the L-32 finds a happy home.
An elderly couple in Maine bought a Remington Quiet-Riter via email correspondence. I shipped it up to them yesterday. During the one telephone conversation we had, he said they moved to Maine a year ago from Minnesota. I commented that the winters must be about the same here. He said last winter they were so disappointed because of the lack of snow but this winter has been thrilling. I guess Minnesotans love their snow. Come to think of it, most New Englanders do too.
I also sold an IBM Wheelwriter 10 to a local writer, several Olympia machines and still have a handful of sales in the pipeline. I got an extra large amount of repairs in the shop this week. That's what bogs me down the most. Repairs are very time consuming, especially old manuals that haven't been serviced in thirty or forty years. It always takes way longer to repair than you think. I had several machine shipped in from Philly, also western PA, Maine and Cape Cod. Saturday was the most fun day of the week for me. It starts off with a visit from my good friend Abraham. He brought in his two favorite machines. His Splendid 33, which I fixed on the fly for him. It had a skipping problem. And the Olympia Traveler, which he left for a thorough cleaning and tune-up. I fixed his machine on my front desk while we talked and also had a handful of customers come in for repair pick ups or drop offs. After an hour and a half he's off to the Atheneum to spread typewriter joy to the masses. I don't call him the Ambassador of Splendid for nothing. Another handful of repairs came in, even after hours because I worked later to catch up a little. It was a fitting end to a very busy, hectic but fun week.
That's it for this week. Thanks for checking it out. Everyone have a wonderful weekend.
Posted by Tom Furrier at 3:09 PM