﻿﻿﻿ ﻿﻿﻿
Today was one of those days, you know, where everything clicks and your in that zone. It starts off I as walk through the front door today at 9am. My eyes immediately look at a green typewriter case sitting in the corner where its been for four months. Its a green Optima from East Germany in early 1950's. I hadn't thought much about it since I got it but just then a clear voice inside me said  you need to recondition this machine now. Somebody wants it today. No kidding. This happens from time to time. Your inner voice is always right as you shall see. So, after I settle in for the day, I stripped the machine and clean, oil and repaired it, replaced the platen and ribbon and thoroughly tested it out. As you can see, it looks great, hardly a blemish on it. It types great and in Congress elite too, one of my favorites. When I was finished I set it on the table in the front of the shop, intending to take a picture of it to put on the blog tonite. A half hour later, a women walks into the shop and says "My ten year old son has suddenly announced that he wants a manual typewriter for Christmas and I have no idea why." She sees the green Optima on the table and says " I love that typewriter. I want that. Is it for sale." With a big smile I say that it sure is. And I'm thinking, boy the universe sure does work fast.
This kind of thing happens alot to me in here. It just reminds me of how tuned in I am to the energy of this place. As anyone whose been in the shop will tell you, this place has an aura, a energy that you can feel. I mean you've got hundreds of old typewriters here with all their history and stored energy in them. Its no wonder that people react so strongly when they come in here. I wish I could record the reactions of people when they first walk in the door. Lots of OMG's and this place in incredible. Its no wonder that I always look forward to coming into work.
That was the first half of the day. I had several other sales and several repairs come in also as well as many people coming in for ribbons and just to look around. I sold a IBM Wheelwriter 6, the women sent a courier over to pick it up and also a man came in at the end of the day and bought a beautiful 1936 Royal touch control model for his ten year old hockey playing daughter. Now here's what really put the day over the top. Anyone who read last weeks post, knows I was upset about not being able to get typewriter oil anymore. Well, late in the day a friend of mine came in to visit and say hi. He's an 87 year old retired typewriter tech. He brought in his friend from Connecticut, also a retired typewriter tech, and he says he's got a present for me. Out of a bag he pulls a gallon of typewriter oil and says Merry Christmas. I took that gallon of oil and hugged it tight. Bill was laughing so hard because he knew I was desperate. I kind of hated to see this day end but tomorrow's another day.

About a month ago I got a call from a Martin Howard in Toronto. He was looking for an item to use in a exhibit he was commissioned to do for the Smithsonian in D.C. I couldn't help him out but we talked about typewriters for awhile and he told me that he collected early American typewriters from the 1880's and that I should check out his website. I did and so should you. These are the first American machines restored back to their original condition and professionally photographed. They are simply stunning. How he got his domain name I'll never know. Check it out at http://www.antiquetypewriters.com/ 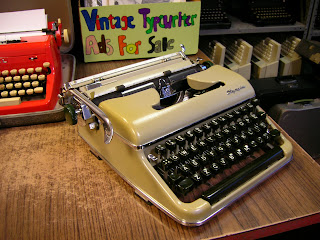 I got this machine in last month and just got around to reconditioning it this week. I wasn't sure which model it was at first. After checking Olympia websites I figured out it is a SM-5. They called this color caramel. The picture doesn't do it justice. This thing shines. It has a luster that is just gorgeous. I predict that this machine will be sold within a week.
Check out the red Royal Quiet de Luxe in the background. That repair came came in around lunchtime. Some lucky girl is getting that for Christmas.
O.K. one more story. Early in the week a elderly gentleman came in to get a ribbon for his typewriter. He look around at all the antique machines on the shelf out front. A big smile came over his face as he pointed to an old Remington 6 Standard and he said I remember that machine. You want to hear a funny story. I said oh yeah and moved in closer. He was stationed at Fort Hood in Texas during WWII training to be a code breaker which he said was a really cool job. There were about twenty-five other men in the class and they had to take a typing class first thing every morning. They were typing on these old Remington 6's that had been modifyied for code breaking class. He said that the platens easily snapped out of the machines in two seconds. A few nights every week the guys would be out till 2am and had to get up at six to go to classes. It wasn't unusual for someone to fall asleep over the typewriter during typing class. When this would happen, the instructor would sneek over to the sleeping soldier and quietly snap the platen out of the machine. Then he would stand a few feet behind the soldier and loudly clap his hands. The man would snap awake and immediately start typing as fast as he could. The whole class would roar laughing as the soldier had no idea what was wrong.
Just picturing that happening is making me laugh. Well, thats it for this week. Thanks for checking it out. Everyone have a great weekend. Go do some Christmas shopping.
Posted by Tom Furrier at 6:16 PM