Many customers that come in the shop tell me a familiar complaint. Their family, friends or co-workers make fun of them for using a typewriter. It can get pretty rude too. What made me think about this now was a conversation I had with a customer earlier in the week. He's a writer in the Harvard Square area who has written all his books on a Smith Corona typewriter. He happily calls himself a luddite and thinks that the people hooked on technology are the clueless ones. We have had lots of interesting conversations over the years usually along these lines. He calls up about a problem with one of the typewriters and soon starts to talk about how his sister is always teasing him about his always writing on a typewriter and not a computer. She says he should just throw away all his machines. He responds that he could no sooner throw out his typewriters than she could throw out her cats. To this she got very mad and slammed the phone down and hasn't talked to him in a week. "She just doesn't understand my relationship with my typewriter" he says. "Typewriters are like close friends to me. They are a part of me now." We talked for awhile about this, then I had to go because a customer came in. So he says, "I think I'll call up my sister now and mend fences."
I'll bet I hear this kind of story at least once a day. I know that I get teased alot, especially on service calls when I'm in a office fixing a machine. People will walk by and make comments like OMG, whats that! The suits are the worst. "Don't you feel like a dinosaur" or " Boy, you're a dying breed." That doesn't bother me because they're walking back to their cubicle to stare at a computer screen for six more hours. Take that! I think that there's a lesson for tolerance in there somewhere.
I happen to think that people who use typewriters are amoung the most interesting people I ever meet. They are creative people doing fun and interesting things in their lives. Its always fun to talk to people coming in the shop for the first time. 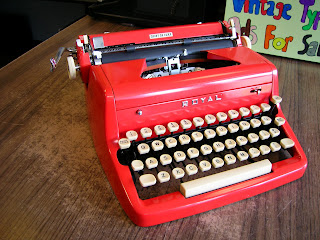 Shop news- I wanted to show this picture of a red Royal Quiet de Luxe because its just a knockout. A mom got it on Ebay and needed it cleaned up and repaired so she could give it to her daughter for Christmas. I wish I had a truck load of these machines.
Super exciting news. Ames has typewriter oil again. The rumor was true. I got a package from Ames yesterday and when I opened it up, OIL! I'll try not to bum out so much next time something gets discontinued on me. Must remember to keep things in balance.
Earlier in the week Matt sent me a link to Pimp My Typewriter. A site put up by mpclemens that features typewriters that people custom painted themselves. WOW. This was awesome. I had never thought about painting machines wild colors and combinations of colors. But it works and has given me lots of ideas. I've already picked out a handful of machines I'm going to experiment on this winter. I'll post the results. Matt's already come up with some color schemes for me. It might make for a neat contest. See who can come up with the most original creations. The link is http://www.flickr.com/photos/mpclemens/galleries/72157622673443179/ 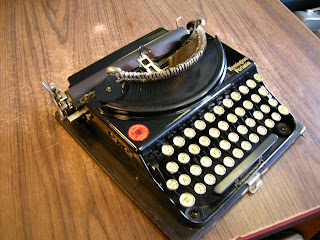 I had a Dad come in this afternoon and buy a mid 1920's Remington Portable Manual typewriter today. He was pretty cool. He totally got the vintage typewriter thing and was going to give it to his daughter for Christmas. She just went off to college this year and wanted an old typewriter to write her poetry on. I would say that this fits the bill. Sorry about the poor quality of the picture. Where's Abraham when you need him.
Well, thats it from the shop this week. Thanks everyone for checking it out. Next few weeks should be very busy in here. Have a great weekend.
Posted by Tom Furrier at 6:10 PM