Let's start off with a nice story. A sailor, a priest and a duck walk into a typewriter shop and the duck- oops, wrong story. Thursday morning, minutes after I got into the shop, I noticed a man looking in my front window at the typewriter display in the bay window. After a few minutes, he came in and said he was getting his windshield replaced on his car a couple of doors down the street. He noticed the typewriters in the window and got excited  looking at  them. Then with a big smile on his face he says, "You'll never guess what my last name is" and he nods his head towards the machines in the front window. I had no idea what he was getting at and he says "Blickensderfer, yeah, that Blickensderfer." Now I'm excited and he says he was thrilled to see my Blick No.5 in the window and wanted to come in and introduce himself. He's a relative of George Blickensderfer, the inventor of the Blickensderfer typewriter. I'm a big Blick fan which I'll get into later. As he explains it , "On the family tree, I'm about half way down and over to the left." I wanted to hear a little family history, so I let him talk for a few minutes before I started asking questions. He said his relatives are spread all over the country. Most have a lot of pride in their family history and have Blickensderfer typewriters displayed in their homes. I'm sorry to say, his first name escapes me, but he confessed he's not as up on the family history as he should be. I say that I'm a Blick fan and show him a copy of a book that I really like , The Five-Pound Secretary. He has never seen this book, but has heard of the authors and thumbed through it, commenting on what a thorough history is in it . He writes down the info so he can pick it up soon. Then I show him some typewriter ads for the Blick from the early 1900's that are framed on the wall and he wants to know if he can borrow them to photocopy them. I say no problem and he'll come back soon to do that. I hope when he drops in again that I can get more information and pass it along. 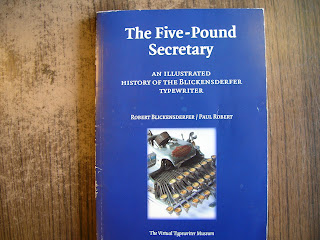 I knew very little about Blick machines until about six years ago when a customer came in with two Blick 7's he wanted repaired and a copy of The Five-Pound Secretary. I said up front that I wasn't really up on Blick repairs but I wanted to tackle the challenge. He said that's fine and wanted me to have the book and maybe I could use the information and drawings in the book to help with the repairs. This book was awesome! To any Blick fans out there, this book is everything you wanted to know. It made me appreciate that the Blickensderfer was light years ahead of its time. The innovations George came up with to make the worlds first portable typewriter make for interesting reading. I was able to use the drawings in the book to figure out how to solve two different mechanical problems on the Blick 7's. I was able to properly clean and repair both machines back to working condition and the owner was thrilled, as was I. Now I had the confidence to fix my own Blick 5's. I had two Blick No. 5's that I got from a reporter about fifteen years ago. The reporter said she had found them in an antique shop in Nova Scotia about twenty years earlier. In a possible interesting twist, I mentioned this story to my new Blickensderfer friend who said that his uncle used to vacation in Nova Scotia in the 1950's and 60's and wouldn't be funny if he had unloaded some machines there and maybe these (my two Blick's) belonged to a Blickensderfer. One of mine I gave to friends who collect and display antiques in their home. The other one that I kept is a earlier Blick 5 from 1895 and is in working condition. I recently rented it to a movie shoot for PBS. Its going to be in a movie about Helen Keller later this year. I was so happy when the producer returned the machine and said the typewriter performed so well and looked so good on film that they were going to show it several times in the movie. That will be fun watch out for later in the year. 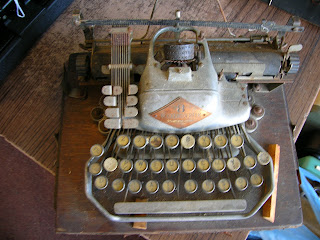 One more Blick thing. A woman called earlier in the week and said she's cleaning out her grandmothers house and she had five typewriters in her basement, where they have been for probably decades. Old Royals, Smith Corona's, Remington Standard and a Blickensderfer 8. As soon as I hear the words basement and years I immediately know the condition of the machines but I want that Blick 8 so bad I said come on down. You probably heard my primal groan when she brought the machines in on Saturday. All ruined and unusable.  Here's a picture of the Blick 8 to the right. If anyone out there would like to claim it as a possible restoration project, it's yours for the asking. I will happily box it up and pay the shipping charges to anywhere in the continental US. I hope there's a taker out there.
﻿﻿﻿﻿﻿﻿﻿﻿﻿﻿﻿﻿﻿﻿﻿﻿﻿﻿﻿﻿﻿﻿﻿﻿﻿﻿﻿﻿﻿﻿﻿﻿﻿﻿﻿﻿﻿﻿﻿﻿﻿﻿﻿﻿﻿﻿﻿﻿﻿﻿ ﻿﻿﻿﻿ ﻿﻿﻿﻿
The shops looking a little messy but hopefully in a few weeks it will be back to normal. I keep tripping over machines on a daily basis.
﻿﻿﻿﻿﻿﻿﻿﻿﻿﻿﻿﻿
﻿﻿
﻿﻿﻿﻿﻿﻿﻿﻿﻿
﻿﻿﻿﻿﻿﻿﻿﻿﻿
﻿ ﻿       On Monday, Abraham paid a rare weekday visit to the shop. He had picked up some machines for me and I had some repairs for him. The Splendid has developed a skipping problem and it was being stubborn. I'd have him type on the machine and then I would adjust the escapement mechanism a bit, then he'd type some more and I'd adjust again until the skipping problem disappeared. But it didn't, so the Splendid has to stay so I can take my time and fix it for good. Check out the blur of Abraham's hands. He's one amazing typist.

In the shop this week, people are starting to pick up repairs finally. I probably had  twenty pick ups this week and almost as many new repairs come in. I had a lot more service calls this week, which makes me happy. Sometime soon I want to write about some of the cool locations I go to on service calls. I go to many interesting place that most people never see. I had a handful of sales this week. Finding new homes are a Olympia SM3 in burgundy, a mid 1950's Royal Quiet de Luxe, a Olivetti L-32 W/French-Spanish keyboard, a Royal Century 2000 electric, and a IBM Personal Wheelwriter. 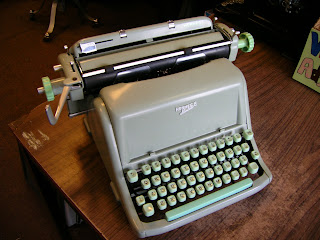 Here's a Hermes 8 Standard, which I have never seen before, was in for a cleaning and repair. It belongs to a ninety-two year old lady. Her daughter brought it in and was presenting it  to her on her birthday this weekend. Well, that's it for this week. Thanks for checking it out. Everyone have a great week.
Posted by Tom Furrier at 10:18 AM