Boston got clobbered by that monster storm Tuesday and Wednesday resulting in a short week at the shop. Parking has become a major problem in and around the city. The worst I can remember since the Blizzard of '78. Even my house has become a casualty of the storm. Ice dams on the back of the house got so bad that water was coming down the walls and ceilings in every room along the back wall. That's the first time we ever had a problem like that and most of my neighbors said the same thing. So my entire weekend has been shovelling snow off the roof , then using a hammer and chisel to slowly (and painfully) chip away at the ice dam. After this post, I have to go back out and remove the last ten feet and I'll be done. Big lesson learned here.

Since the shop was closed Tuesday and Wednesday, not a heck of a lot happened, but it was still an exciting week. On Monday I went on a service call to repair a machine of a elderly gentleman in the
Mission Hill section of Boston. John is in his mid eighties and a veteran of WWII. Every month he types a newsletter to his fellow veterans with news and updates on everyone. His Smith Corona Executive electric typewriter died and he was hoping it could be repaired. I stripped the machine on his kitchen table and showed him that the left motor bearing had broken apart, binding up the motor solid. I would have to take the machine back to the shop and rebuild the motor and clean and oil the machine, then it would be back to great running condition. This made him very happy because he said as soon as he gets the machine back he has to start the next newsletter. On Friday, I delivered he Smith Corona back to him and he was thrilled. It was an honor to be able to fix his machine so he could get back to doing his good deeds.
All week long I had Friday night on my brain, the Chronicle television show. I'd been worrying about how it was going to come out. Everyone told me to chill, that it would be just fine. On Friday, Channel 5 ran promos all day long featuring me in the promos. People started calling the shop saying they just saw me on the TV. Come Friday night at 7:30, my wife, daughter and I cuddled on the couch all excited, not quite sure what to expect. The show was about things that will  be obsolete in the near future. They did a segment on the Post Office, bookstores, newspapers, payphones and the last segment on typewriters. All in all, they did a good job on the story and I didn't embarrass myself too badly. It was a good plug for the shop and will get many people thinking about typewriters. Saturday at work the phone rang off the hook for the whole time I was there. Ninety percent of the calls were people who saw the show. Many were old customers calling to congratulate me and wish me well. Many were new customers calling to bring in repairs, inquire about sales or try to sell me their old machines. Many people came in after seeing the show. I actually had a crowd in the store for most the morning. I love it when the shop is really busy, its a natural high. I hope it continues for a while. I should be able to get a DVD of the story from the station. If I can I will try to post it soon. The typewriter part was about five or six minutes long. 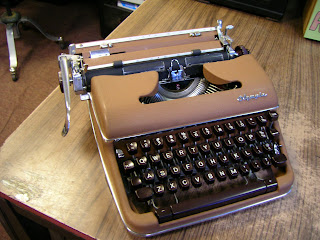 On Saturday a nice man come in looking to purchase his first typewriter and was really excited about it. He looked to be in his mid-twenties and I think originally from the NYC area. He narrowed his choices down to two older classic machines and two more modern contemporary ones. He kept turning to me saying how exciting this was and how he liked something different about each machine. Making up his mind was going to be tough. I really thought he was going to leave with the burgundy Corona but he fooled me and picked the brown Olympia SM4. He said he went for quality and wanted a machine that would last with few problems. While he was in the shop deciding what machine he wanted, several customers would engage him, offering advice or encouragement. He left with a big smile saying how happy he was that he came in.
I rented a bunch of old manual typewriters to Harvard again this past week. They were having a party or some kind of gathering and wanted the typewriters there because they were such a hit last time. I'm glad they are getting a kick out of them. Maybe it will inspire some people to pick one up.
Lastly, I got a email from a girl in NYC  who works for a little Australian company called Polli. They just designed a typewriter necklace and wanted to know if I would mention them in a post. You can just click on the link and see the necklace if your interested. My blog was recommended by a friend who follows this blog.
http://polli.com.au/pendants-1/kohl-gold/kohl-gold-typewritter-necklace

I'm expecting a humdinger of a week coming up. I'll tell you all about it next weekend. Thanks for checking it out. Everyone have a great week.