Things are going along just fine this week at the shop. Most of the hoopla has died down and I'm catching up quickly on my backlog of repairs. Another week or two and I should be completely caught up. That will be a relief because I haven't had any time to recondition machines for sale. I need to tear into that pile of machines in the front of the shop so customers can have a place to stand. There's a lot of really good machines buried in that pile. The sooner I can work on them the more machines I'll have to sell.
I had one thing that happened in particular that made my week. It started with a phone call from a retired doctor in town who called and asked if I was interested in buying nine typewriters. He said he had collected these machines over his life and needed to clean out his home a bit. He mentioned Hermes, Corona and Underwood but also mentioned that some had been stored in the basement for a long time. (There's that dreaded basement word again.)  So now I'm really not expecting much except a bunch of moldy, rusted out junk. I arranged to come over that morning to see what he had. I parked in front of his house, but it's not a house. It's a castle. No kidding. It looks like a real castle, in the city, surrounded by apartment buildings. I quickly survey the outside of the building, then walked up to the front door. This door was huge and weighed about four hundred pounds, complete with a wrought iron knocker the size of my arm. An elder gentleman open the door and warmly invites me in. I immediately step back more than a hundred years in time. It looks just like the inside of a Kings castle. I didn't notice the pile of typewriters laid out for me in the front hall. I was dazzled by the intricate wood work, paintings, tall clocks, tapestries, beautiful hand painted tiles and on and on. All I could say was "What is this place?" A big smile comes across his face as he says,"This house has a very interesting history. Would you like to hear it." I think the eyes bugging out of my head told him yes. So he says that this house was built in Austria specifically for the 1893 World's Fair in Chicago. It is a faithful reproduction of a Town Hall in the Bavarian countryside in the 1600's. Because it was for the World's Fair, I would imagine that many of Austria's best craftsman made this house. It was disassembled, shipped to Chicago and put back together. After the fair it was sold and shipped to Boston, where it still stands. The Doctor said he's lived here many years and spend most of his adult life acquiring the antiques to furnish it and acquiring other peoples collections too. In the last thirty years I have been in a handful of incredible ornately decorated houses in and around Boston. This might be the most lavish private home I've ever been in. I told my wife it was kind of like the Breakers Mansion in Newport. But on a much smaller scale. He graciously gave me a tour of the downstairs of the house and talked a bit more about it. Before I realized it we were back at the front hall and I'm looking at a pile of typewriters. The first thing I notice is a Hermes 2000 case and then a small black case that says Bing No.2. Then I see an old Corona case and a Underwood No.5 and a Olivetti Lettera case and a few more standards. Maybe this trip will be worth my while after all. I quickly check each machine. The Hermes 2000 looks good and works,Yeah! The Bing looks perfectly preserved and its works! The Olivetti case is a L31 in good shape. The old Corona with curved front is a total loss. A rust bucket. Two other Smith Corona manuals are total losses. These must be the machines from the basement. The Underwood No. 5 is just fair but a keeper. I say I'll take them and we agree on a price and I load them all in the truck of my car. I had to make several trips and had to open and close the front door several times. That's the biggest and heaviest door I ever had to use. 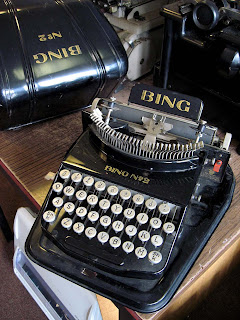 High end machines seem to fly out of this place. When I get something nice in, somehow a typewriter vibe goes out and someone will call within a day or so asking for the exact machine I just got. It happened again earlier this week. A elderly man came in and sold me his Hermes 3000. The nice curved front in Pica. He said he bought it new and took great care of it. He certainly did, because it was one of the most mint condition 3000's I ever saw. When I got home that night I got a email from a man in South Carolina, looking for a excellent condition Hermes 3000. First come, first serve. So, off to South Carolina goes the Hermes. 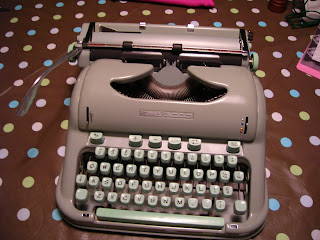 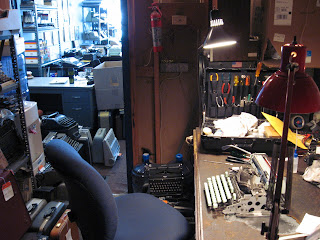 Even though its slowing down a bit with the phone calls and walk in traffic, a lot of new business was generated this week. The service calls have been outstanding these last couple of weeks, including a handful of new accounts. A few new service accounts were started. I have even started doing service calls outside of my normal area. There's just no one else people can go to , so I'm willing to travel futher than normal. With gas prices going sky high again, I don't know how wise a move that is. The bottom line is that I just want to fix everyone's machine.
I got another letter from a customer in New York this week. He said he was in two weeks ago and bought a burgandy Olympia SM3. He wanted to say how much he loves the machine and his typing speed has increased by thirty words a minute. He also has a Hermes 3000 that needs repair and hopefully will drop in this summer when he visits again.
Well, that's it for this week. thanks for checking it out. Everyone have a great week.